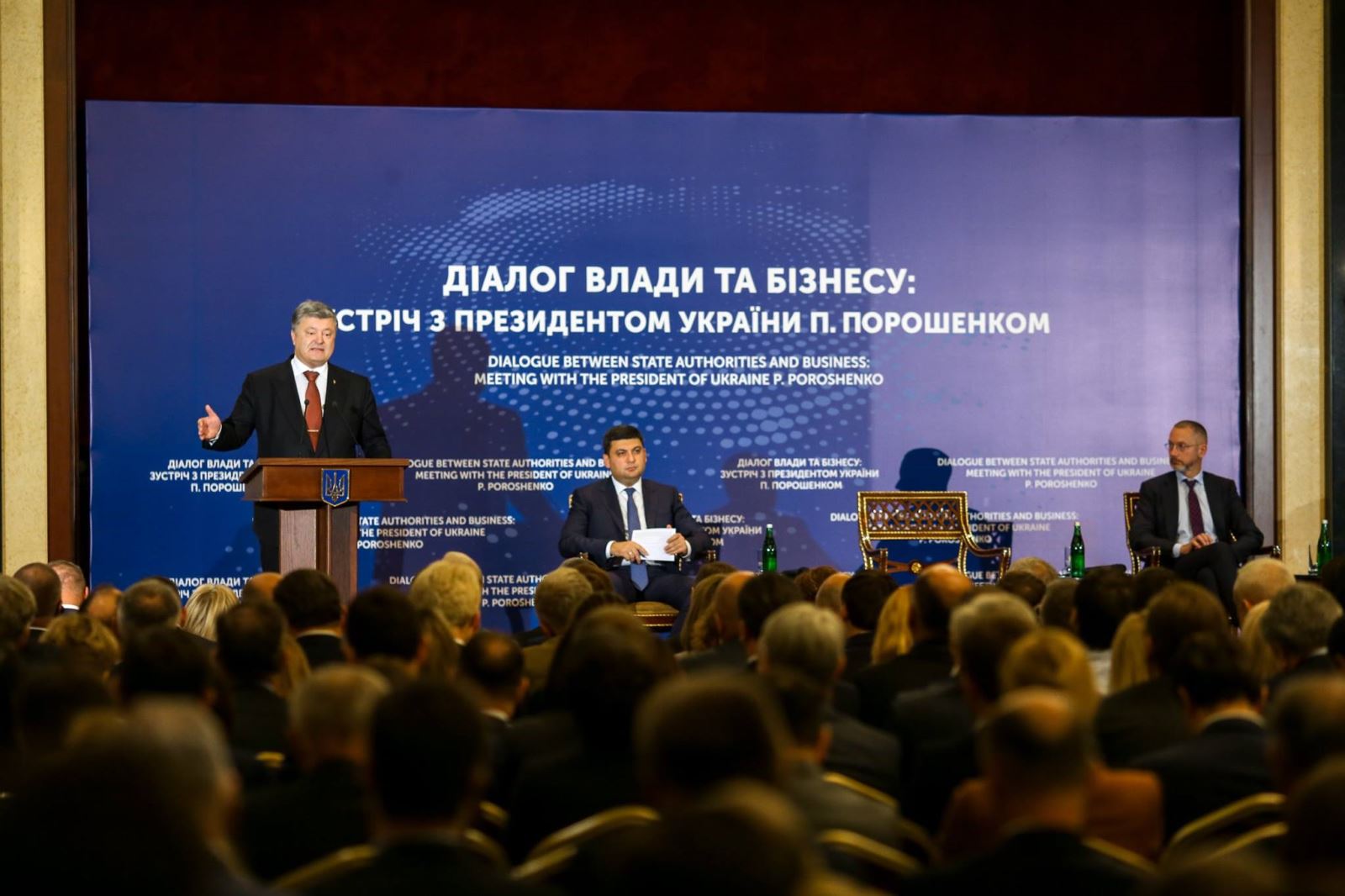 Dialog of business and the authorities took place at the highest level. Ukrainian entrepreneurs were represented by Ukrainian Entrepreneurs’ Union (UEU) at the meeting with the first persons of the state, and “Delivery” is an active member of the Union. Together, more than 300 representatives of business were at the meeting from all over Ukraine. “Delivery” was represented by its General Director Olena Lakatosh.

The meeting was opened by the President of Ukraine Petro Poroshenko and the Prime Minister of Ukraine Volodymyr Groysman. The President and the Prime Minister told about the pace of economic reforms and shared with the achievements of the state for the last year. Among the main things – improvement of macroeconomic situation in the country, introduction of visa-free regime with the EU, Agreement about association between Ukraine and the EU was commenced, and others.

First vice Prime Minister of Ukraine, Stepan Kubov, Chairman of the Committee of Verkhovna Rada on issues of tax and customs policies, Nina Yuzhanina, the secretary of the National Investment Council, Boris Lozhkin were present in the auditorium.

The main topic of the sincere talk became illegal actions of law enforcement authorities towards the business. That is why it was very important that there were present representatives of the Power block: General Prosecutor of Ukraine Yurii Lutsenko, Chairman of the National Police of Ukraine, Serhii Kniazev and others.

Another block of issues that were raised by UEU touched deregulation and business climate. The Union aspires to have maximum decrease of influence of the state to business by creating comfortable and fair conditions for development. UEU once again reminded about necessity of urgent approval of deregulation laws that have been in the Verkhovna Rada for a long time.

The entrepreneurs paid particular attention to issues of privatization, currency liberalization, and protection of rights of the creditors.

The most important thing was that the President, the Prime Minister, the General Prosecutor admitted pressure from the law-enforcement structures as problem number one for the Ukrainian business. The top people of the state promised to stop “mask-shows” very soon and by the end of the year to hold the Day of deregulation in the parliament and issue the necessary laws that influence the conditions of running businesses in Ukraine.

Let us remind that “Delivery” takes active part in UEU activities: following the initiative of the company, the Committee of transportation and logistics was created, today it is headed by Andrii Ivasiv (deputy chairman of  Delivery Group). For the year of existence, the Committee was joined by more than 70 companies – members of UEU. Active work on perfecting legislation foundation in the field of logistics, transportation, and infrastructure is being provided and also lobbying interests of entrepreneurs at the national scale.

Become the member of UEU  and join the Transportation and Logistics Committee!

The most popular Delivery service from the optional ones as of today is pick-up and delivery of cargo at the specified address. Thus, only for the first six months of 2016, the share of addressed service reached 25% from all the transportations.

One of the main requirement to this service is not only the speed of the order performance, but simplicity of its performance.

For this purpose a multichannel system of processing orders for addressed pick-up and delivery was developed:

Order a service of pick-up/ delivery by any convenient way for you!

Let us drive your attention to the fact that on September 18, warehouse Chernivtsi-1 is not going to work due to technical reasons.

We are going to inform about renewal of work of the representative office later.

We are glad to inform you that on September 18, new representative office in Kherson-3 city (Kherson region) is opening.

We are waiting for you at the address: 4, Parovozna street 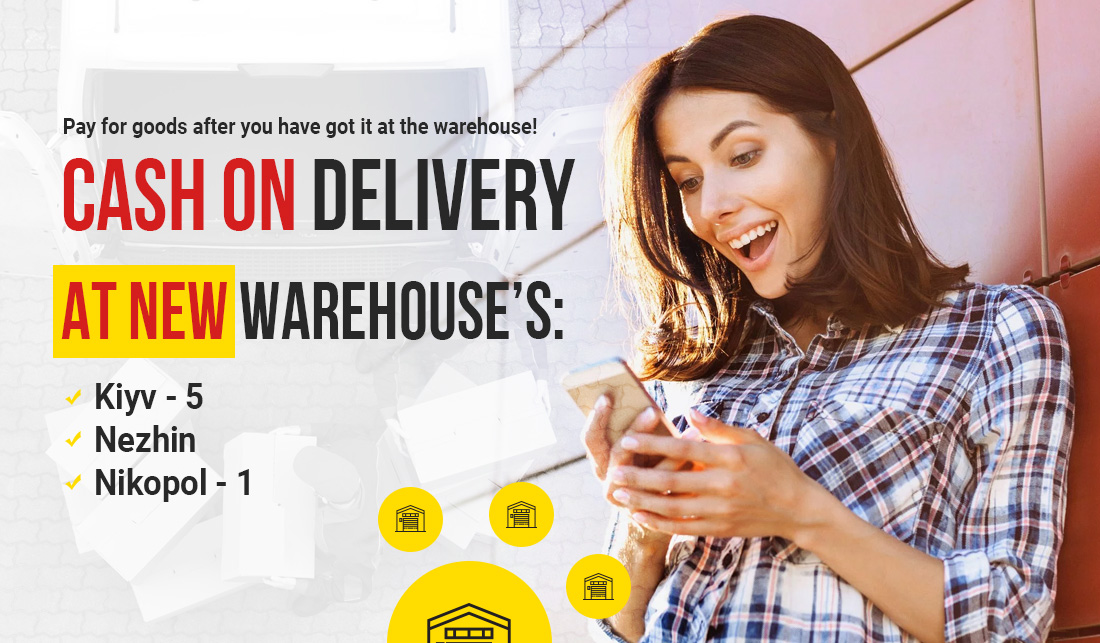 From September 14, the service starts working at the representative offices of the company Kyiv - 5, Nikopol - 1, Nizhyn!

"Cash on Delivery" service allows the clients to pay cash for the goods.

Cash on Delivery service is available for all the kinds of deliveries: cargo, parcels, pallets, tires.

In the future the company plans to increase the number of the departments where the service can be used and give the clients an opportunity to transfer cash for the goods in other cities of Ukraine.

Let us remind you, that from July 2016, the COD service was launched on 86 representative offices already:

Offer “i want to get more in september!” 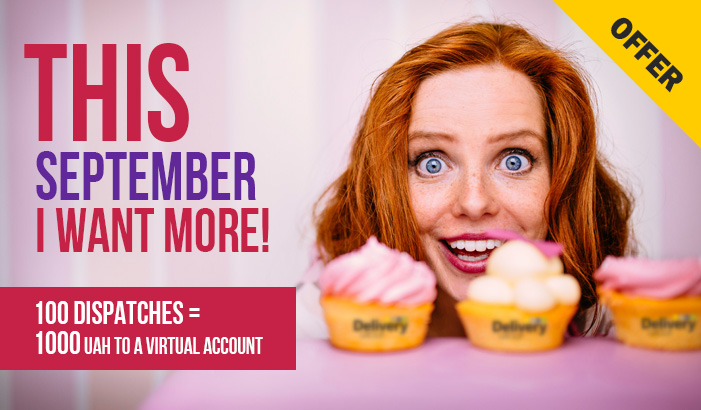 September makes your wishes come true!
Get much more from usual services!

For each your sent or received item we return you 10 UAH as bonuses*!

In order to take part in the offer:

You can exchange your points:

·         For payment of transportation from warehouse to warehouse

Let this autumn be productive for you!

Calculating the price of courier services – now in our extended calculator from “Delivery”, too

“Delivery” continues to perfect methods of calculation and ordering services at the website.

In the extended calculator a new option appeared – calculating the price of courier services.

Now to calculate the service and call the courier can be done by the client independently, without referring to the Hotline of the company. For this purpose after calculating the price, follow the link “Call the courier” and fill in the necessary fields.

Let us remind you that in May, “Delivery” launched a service of courier delivery of documents and parcels up to 2 kg within Kyiv for business clients and internet shops.

The clients can order delivery of documents and parcels day to day or for the next day with a limitation of time of delivery before noon, before 3 pm, and before 6 pm. The detailed conditions of providing the service are given here.

Peculiarities of work of Kharkiv-4, on september 8

From September 9, the warehouse renews its work as usual.

Accept our apologies for temporary inconveniences.

We are glad to inform you that on September 4, new representative office in Savran city (Odessa region) is opening.

We are waiting for you at the address: 3, Centralna street